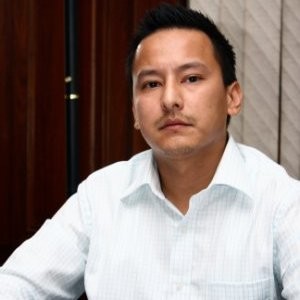 Meet Dije Shrestha! One of the seed investors who sits on the board of 8byte Creative Studios, a startup that graduated from Year 1 of the I-Cube business incubation program. Interested in becoming a seed investor? Drop in during our second round of Investor Meetups on Thursday, December 12th at Nepal Communitere.

What drew your interest in the area of business and investments in Nepal?

My entree into the business sector was quite organic. I grew up in an environment where the family business weaved into the very culture around me. I felt involved and a part of the business from an early age and was eager to add value to the business my family had built. In that sense, I was always passionate about business.

I made a conscious decision on my part to work within the different sectors of our business: energy, IT, insurance to better understand what would drive me personally. Then during my MBA when I took a few IT courses it sort of just clicked for me. Essentially, managing information is the linchpin of any business. There is huge potential for Nepali businesses to capitalize on big data and data management systems for informed decision making. Especially given how ad-hoc Nepali businesses can be! 8byte Creative Studio’s alignment with the IT and data sector was one of the reasons the startup drew my interest as a seed investor.

You sit on 8byte’s company board, how does this relationship work?

Our board meets once every three months, sometimes a bit more. Since it’s a younger startup our role as board members has a significant mentorship element to it. Working with a startup is much more involved in some ways compared to more mature businesses. The board isn’t just monitoring management, its constantly lending support and helping troubleshoot where needed.

As investors who sit on the board, we are very much engaged and checked-in at every meeting. Our roles go beyond just the monetary support, whether its passing along feedback from the market, observing their sales visits, opening up our business networks. It’s not the type of dynamic where you just hand out money to the startup and expect it will magically transform into 3 or 4 times in returns. I don’t think that’s where the startup and investments space in Nepal is, right now.

Do you think there are any misconceptions Nepali startups have about the investor-investee relationship?

Startups have to bring a level of professionalism to their business to attract investors. Establish transparency with a good governance structure, keep your accounting books in order, make sure there are no compliance issues. It’s difficult enough trying to operate your own business and keep things in check. It’s a whole other ball game when it’s another person’s business. No board member would want to get dragged into the details because of poor management.

If there’s a brilliant idea positioned in a growing market backed by a team with the vision and grit to take it forward, and the only thing holding them back is lack of investment then as an investor I’m ready to offer my time, mentorship and capital.

Of course an investor will not put money into any idea the entrepreneur has! But I’d also hate to see a promising business get stuck just because it costs extra for them to execute their big idea. Ask yourself: is that big, expensive idea stopping you from growing your company? Because that fear should not hold you back. Don’t stunt the growth of your own startup.

How comfortable do you think Nepali investors are getting into seed-level investments?
I think it largely depends on the amount of money you are asking for from the investor. In Nepal, it’s still mostly relationship driven capital. I myself have invested based on relationships in the absence of adequate data or information about the industry.

Becoming a seed investor was a bit different. As I mentioned, the amount each investor had to put in was minimal. It’s also one of the first times it’s being done in an organized way, with an entity like Safal Partners overseeing the process, providing checks and balances. Speaking for myself, I certainly have more comfort about what’s going on with the investment I made. I think this could be the right channel for an investor who wants to know what they are getting into.

What has been the most surprising or interesting learning from investing in a Nepali startup like 8byte Creative Studios?

It’s been surprising, because initially I had doubts about whether Nepal was really ready for these types of investments.

I was first introduced to the investor side of things after being invited to attend a few Demo Day pitching sessions. In a way, that was one of the first times I stepped out of the bubble of own business. It was an eye opener to learn of interesting, new ideas coming out of young Nepali startups. I was drawn to 8byte’s concept of leveraging Edtech to strengthen the schooling system in Nepal. But I also understood it’s a small startup with a lean team and was likely going to run into challenges trying to keep their affairs in order while also running the business. But the business incubation seemed to have built their foundation to a point where I saw potential for it to go further.

But still my question remained: could you really just give someone money and trust them to run the show? What really drew me into becoming a seed investor was that I could put up 1- 2 lakhs and get to test and learn for myself about the Nepali investment space. Since it was a smaller investment amount I didn’t mind giving out that money. This is how it needs to start.

How comfortable do you think Nepali investors are getting into seed-level investments?

Until there’s a success story, it’s all just going to be speculation. But when we can show a proof of concept, then the structure and systems can be built around that. From there, a professional market that specializes in investing in startups and ventures can probably emerge in Nepal. In the absence of an established culture of investments and startups, you start small and are banking on the one story of success to draw more people into this space. WOW – Happy 5th BIRTHDAY TO US!
A BIG HAPPY BIRTHDAY to Nepal Communitere! It’s hard to believe that we started back…