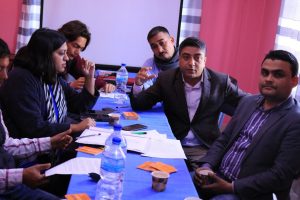 Chitwan’s first ever business incubation program is now underway, as Antarprerana and Nepal Communitere expand I-Cube Business Incubation Program out of Kathmandu into Chitwan. Nepal Communitere has been running I-Cube in Kathmandu for the last year and a half, where entrepreneurs with young start ups have received support for a duration of a year, and had access to seed investment. The project in Chitwan, which started in December 2018, aims to adopt the I-Cube Incubation Program model comprising of monthly mentorship, weekly check in classes, and opportunities for facilitated networking for a duration of 6 months for 10 bold and innovative startups so that they can survive and grow.

The importance of supporting local nepali entrepreneurs and startups for Nepal’s socio-economic growth is quickly being realized as venture capitalists, private equity firms and other such organizations have been showing support. However, early stage entrepreneurs still lack the support they need; efforts to build an entrepreneurial ecosystem in Nepal have mostly been focused within Kathmandu. Nepal faces many challenges such a limited economic base, lack of support for the business sector, rising unemployment, and mass migration. These problems are faced acutely outside of Kathmandu therefore solutions and mitigating measure should also also be focused outside of Kathmandu, which is where I-Cube in Chitwan comes in.

“We chose Chitwan because of its close proximity to Kathmandu, but mostly because a lot of people migrate to Chitwan, which makes the city a diverse melting pot; there is a lot of potential for startups in Chitwan, and there are a lot of young entrepreneurs with drive who want to remain in their country. It is important to make them aware of incubation, and support these local entrepreneurs so that people believe that Nepal has potential”, says Anil Parajuli of Nepal Communitere. Till date, there have been many rounds of meetings with local stakeholders; potential investors, government officials, and private companies, and they have now been made aware of incubation and startups.

The goal of the project is to support the growth of entrepreneurship outside of Kathmandu in a sustainable way. Collaborators from Chitwan will take ownership of the program and conduct their own masterclasses, weekly check-ins, networking events, with the support of Antarprerana and Nepal Communitere. The goal is to use resources found within and familiar to Chitwan so that existing skills and capacity of our stakeholders in Chitwan can be enhanced.

I-Cube in Kathmandu wouldn’t be successful without our supporters and collaborators; we knew collaboration would be vital for Chitwan. With the objective of ensuring ownership and facilitation of the program, a steering committee comprising of representatives from Antarprerana and Nepal Communitere, Chamber of Commerce, IEDI and related provincial agencies has been formed to monitor, guide and facilitate the project programs. Our main knowledge partner is Presidency college and they have been vital in helping us establish connections with local stakeholders. Our other key collaborator CCI, Chamber of Commerce in Chitwan, will provide a space for I-Cube entrepreneurs, which will serve as an community centre or an incubation centre, where new startups and will nurtured and made investment-ready.

After the program was announced in Chitwan, we got an overwhelming amount of positive response and applications. The entrepreneurs selected will have startups that they have been working on for a year already, and show passion and a commitment to succeed. After orientation, baseline interviews and health check ups, the monthly masterclasses will start to enhance the capacity of entrepreneurs and startups by providing strategic support and interventions to possibility provide them with the seed capital to initiate their start-ups. In doing so, the project will contribute directly towards creating an entrepreneurial ecosystem in not only Kathmandu, but all of Nepal. I-Cube Chitwan is a pilot program for an incubation program based outside of Kathmandu, and we hope to expand to other cities in different provinces. I-Cube: For Sustainability
If you have been to the Nepal Communitere office, you have probably noticed our green…

I-Cubers receive seed investment to take off!
The hard work throughout the year-long I-Cube program paid off with a grand achievement for…
Empowering Nepali Innovators
Nepal Communitere Newsfeed